The Propagation of Admixture-derived Evolutionary Potential

The Propagation of Admixture-derived Evolutionary Potential 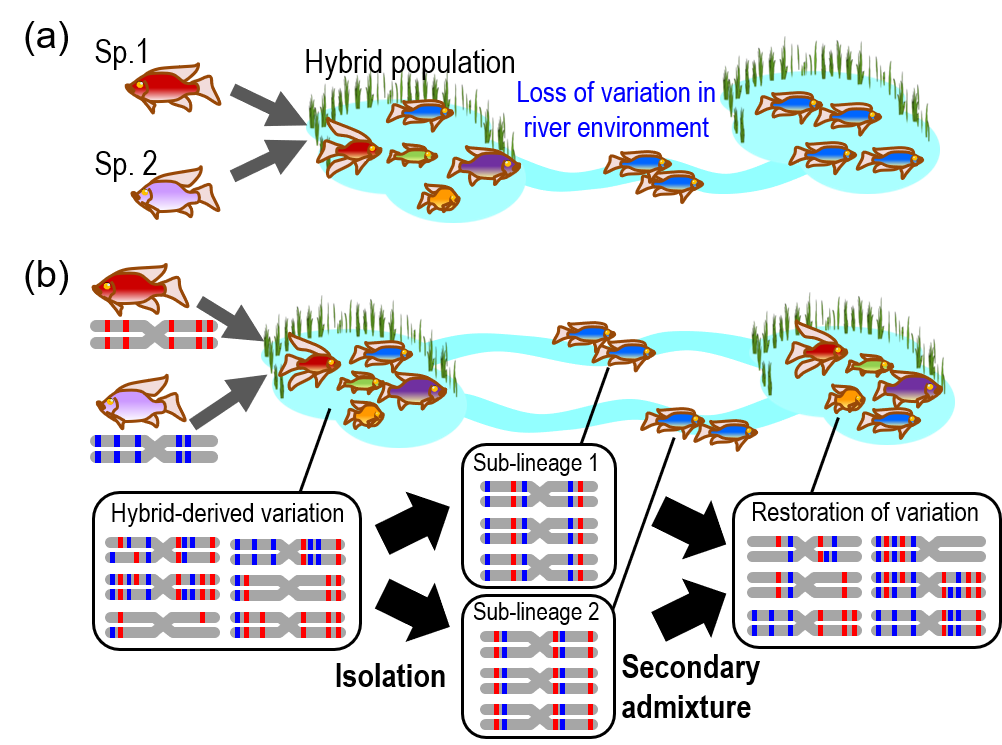 Figure 1. Examples where hybridization-derived genetic variation can and cannot spread to different areas. (a) Two regions (lakes) are connected by a single path (river). In this case, genetic variation generated through hybridization in one lake cannot spread to the other lake because natural selection by the river environment removes a large fraction of genetic variation from the population expanding along the river to the second lake. (b) Two lakes are connected by two geographically isolated rivers. While genetic variation is lost in both populations expanding along two rivers, they can form genetically distinct sub-lineages. This is because different sets of alleles can fix in the two populations if the same optimal phenotype in the river environment can be generated by multiple different combinations of genes. The secondary admixture between sub-lineages in the second lake can restore old genetic variation that had originally been generated in the other lake through the past hybridization event. ⒸTohoku University
To address this theoretical conundrum, Kotaro Kagawa and his colleague Ole Seehausen used their individual-based model to simulate the evolutionary dynamics caused by hybridization under various geographic, ecological, and historical scenarios. Results from over 15000 simulations provided two theoretical findings. First, simulations showed that hybridization-derived genetic variation geographically spreads and persists for long periods only if the hybrid population becomes separated into isolated sub-lineages. Subsequent secondary hybridization of the sub-lineages can potentially reestablish genetic polymorphisms from the ancestral hybridization in places far from the birthplace of the hybrid-clade and long after the ancestral hybridization event. This leads to the second finding: genetic variation generated through a single hybridization event could lead to multiple independent episodes of adaptive radiation far apart in location and time when ecological and geographic conditions promote the temporal isolation and subsequent admixture of sub-lineages.
"These findings provide not only an explanation for the recurrent adaptive radiation of African cichlids but also a novel insight that exceptional genetic variation, once generated through a rare hybridization event, may significantly influence clade-wide macroevolutionary trends ranging over large spatial and temporal scales," said Dr. Kagawa.
Publication Details:
Title: The propagation of admixture-derived adaptive radiation potential Authors: Kotaro Kagawa, Ole Seehausen Journal: Proceedings of the Royal Society B: Biological Sciences
DOI: 10.1098/rspb.2020.0941
Link
Tohoku University
Contact:
Kotaro Kagawa
Graduate School of Life Sciences
Email: kotaro.kagawa.e3(at)tohoku.ac.jp