BRCA1 is involved in many cellular processes, including DNA repair and centrosome regulation. Defects in the regulatory mechanisms of centrosome and DNA repair result in defective mitoses, chromosome segregation errors, and the accumulation of DNA damage. These are significant sources of genome instability, a hallmark of cancer.

Our research particularly focuses on the functions of BRCA1 in DNA repair and centrosome regulation. To analyze the functions of BRCA1 and its related proteins, we perform cytological analyses, analyses using genetically modified mice, and analyses of clinical specimens. This research will contribute to the further understanding of carcinogenesis and aid in developing novel cancer therapies. 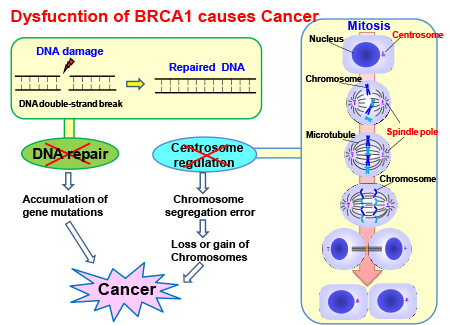 To diagnose HBOC, genetic tests are performed by direct sequencing. Most mutations in BRCA1 are frame shift and nonsense mutations, which cause truncated proteins. They are diagnosed as pathogenic mutations, because they lose the C-terminal domain of the protein, which is important for its function as a tumor suppressor. However, we could not determine whether missense mutations were pathogenic. Therefore, we have developed functional assays to analyze the function of BRCA1 with the reported missense mutations in the N-terminal region. Their functions in centrosome regulation and DNA repair were analyzed by centrosome amplification and homologous recombination assays, respectively (Cancer Research 2010, Oncogene 2012).

We have elucidated the cellular responses of BRCA1 to various DNA damage using a molecular imaging technique. In particular, we have examined the in situ response of BRCA1 accumulation at laser micro-irradiation-induced double-strand breaks (DSBs). BRCA1 accumulated at DSBs via its amino (N)- and carboxyl (C) -termini. N-terminal BRCA1 rapidly accumulated at DSBs in a Ku80-dependent manner (Molecular Cellular Biology 2008).

To analyze the response of BRCA1 to UV irradiation, we generated local UV irradiation in cell nuclei using an isopore membrane filter. Interestingly, BRCA1 accumulation was dependent on the Cockayne syndrome B protein, that is involved in the nucleotide excision repair pathway. BRCA1 immediately accumulated at the locally UV-irradiated sites in a transcription-dependent manner. These results suggested that BRCA1 is involved in the transcription-coupled repair (TCR) process for UV irradiation-induced DNA damage (Cancer Science 2011).

Recently, we have identified a novel BRCA1-related protein, Obg-like ATPase 1 (OLA1) (Molecular Cell, 2014). Knockdown of OLA1 caused centrosome amplification due to overduplication and fragmentation of centrosomes similar to that seen with the dysfunction of BRCA1. Interestingly, the breast cancer-derived OLA1 mutation does not bind to BRCA1 and fails to rescue the OLA1 knockdown-induced centrosome amplification. The familial breast cancer-derived BRCA1 mutation I42V abrogates the binding of BRCA1 to OLA1. These findings suggest that OLA1 plays a role in centrosome duplication and functions as a tumor suppressor together with BRCA1. BRCA2 also localizes to the centrosome, playing a role in the regulation of centrosome duplication. Centrosome amplification has been detected in a broad range of malignancies. The involvement of BRCA1 and BRCA2 in centrosome duplication seems to be as important as their function in DNA repair and highlights their roles as tumor suppressors critical in familial breast cancer. 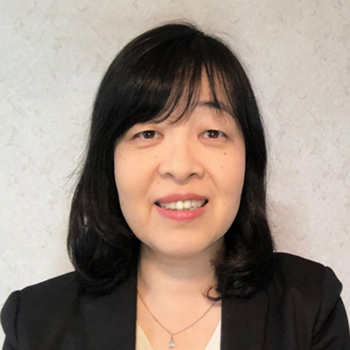 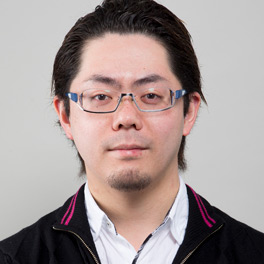