Plants are experts in survival and can control the direction of their roots to maximize the use of resources around them. Using specialized cells, they can sense gravity and redistribute hormones, called auxins, to stimulate growth and allow vital features of the plant to develop. However, a big puzzle is how this transport process occurs at a cellular level. To learn more, researchers in Japan examined cucumber seedlings germinated under the very weak gravity - or microgravity - conditions of the International Space Station.
Cucumbers were chosen for the study as they - like other "cucurbitaceous" seedlings such as melons, pumpkins and squash - feature specialized protuberances, or pegs, whose formation is regulated by gravity. These pegs form during the plant's early growth stage to help the seedlings emerge from their hard seed coat and anchor the developing plant in the soil while its roots form. 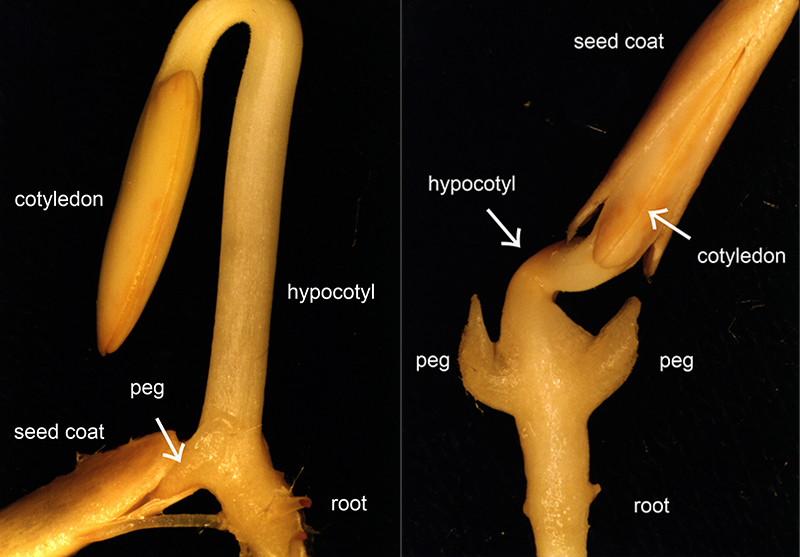 When seeds are placed before germination either i) in a vertical position with their embryonic roots pointing down or ii) subjected to microgravity conditions, a peg develops on each side, explains Hideyuki Takahashi, a member of the Space and Adaption Biology Laboratory at Tohoku University's Graduate School of Life Sciences. But when they are placed horizontally on the ground, peg formation on the upper side is suppressed in response to gravity. 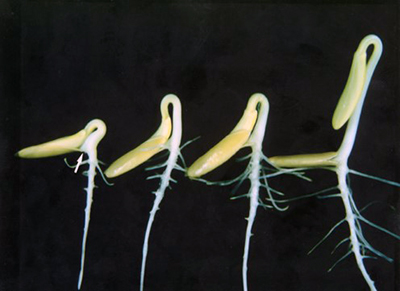 Cucumber seedlings develop a peg on the lower side of the transition zone between hypocotyl and root. The peg holds the seed coat while the hypocotyl elongates to pull the cotyledons and plumule out from the seed coat.

In this latest round of work, reported in the journal Nature Microgravity and using samples grown on board the International Space Station, Takahashi and his team highlight the valuable contribution of the gravity-sensitive CsPIN1 protein to this process. The role of the protein in facilitating the transport of the growth hormones had first been suggested in previous experiments conducted on Earth.

To gain further insight, the researchers loaded cucumber seeds into specially designed canisters, which were sent up to the space station. Here, water-absorbent plastic foam in the container was irrigated and the now-germinating seedlings were grown in the microgravity compartment of the cell biology experiment facility for 24 hours. Then the cucumber seedlings were either i) maintained in microgravity or ii) gravi-stimulated by applying a 1g centrifugal force for a further two hours.
One of the big challenges facing the team was finding a suitable fixative to "freeze" the status of the seedlings germinated on the space station so that the samples could be analyzed in detail back on Earth. Safety regulations on the space station prohibited the use of the standard fixing solution of ethanol, chloroform and acetic acid, but after much testing, the scientists developed an alternative based on a mixture of acetic acid, ethanol and distilled water.
Reunited with their cucumber seedlings, the Japanese researchers used a staining technique to pinpoint changes in cellular behaviour induced by gravi-stimulation. Examining cross sections of the seedlings under a microscope, the scientists found that the CsPIN1 protein (highlighted during the staining process) can relocalize under the influence of gravity.
Specifically, this change in the position of protein was found to occur in the so-called transition zone of the cucumber seedling - the area between the stem and the roots - where the pegs develop. What's more, it appears that this behaviour stimulates the formation of a cellular canal capable of transporting growth hormones from one side of this zone to the other.
"This result helps to explain the gravity-regulated decrease in auxin level and thereby suppression of peg formation on the upper side of horizontally growing cucumber seedlings," adds Takahashi.
Put simply, these findings point towards the mechanism by which the seeds are able to turn on and off the growth of their anchoring pegs in relation to their orientation with respect to gravity. And, as result, boost their chances of survival.
The work represents another step forward in understanding the life of plants.
Publication Details:
Authors: Yamazaki, C., Fujii, N., Miyazawa, Y., Kamada, M., Kasahara, H. et al.
Title: The gravity-induced re-localization of auxin efflux carrier CsPIN1 in cucumber seedlings: spaceflight experiments for immunohistochemical microscopy
Journal: Nature Microgravity
DOI: 10.1038/npjmgrav.2016.30
For enquiries about this article:
Professor Hideyuki Takahashi
Graduate School of Life Sciences, Tohoku University
Email: hideyuki＊ige.tohoku.ac.jp (Replace＊with@)