A variety of animals have male-specific ornament traits and these ornaments are favored by female choice. Which male traits are preferred by females often varies among females. Genetic mechanisms that create and maintain variations in female preference has been one of the central questions in evolutionary ecology.
A research team led by Tohoku University in Japan has revealed that variation in expression of opsin genes, which code light-sensitive pigments, generates variable light sensitivity and color vision and thus lead to variation in female response to male sexual colors in a small fresh water fish, the guppy. 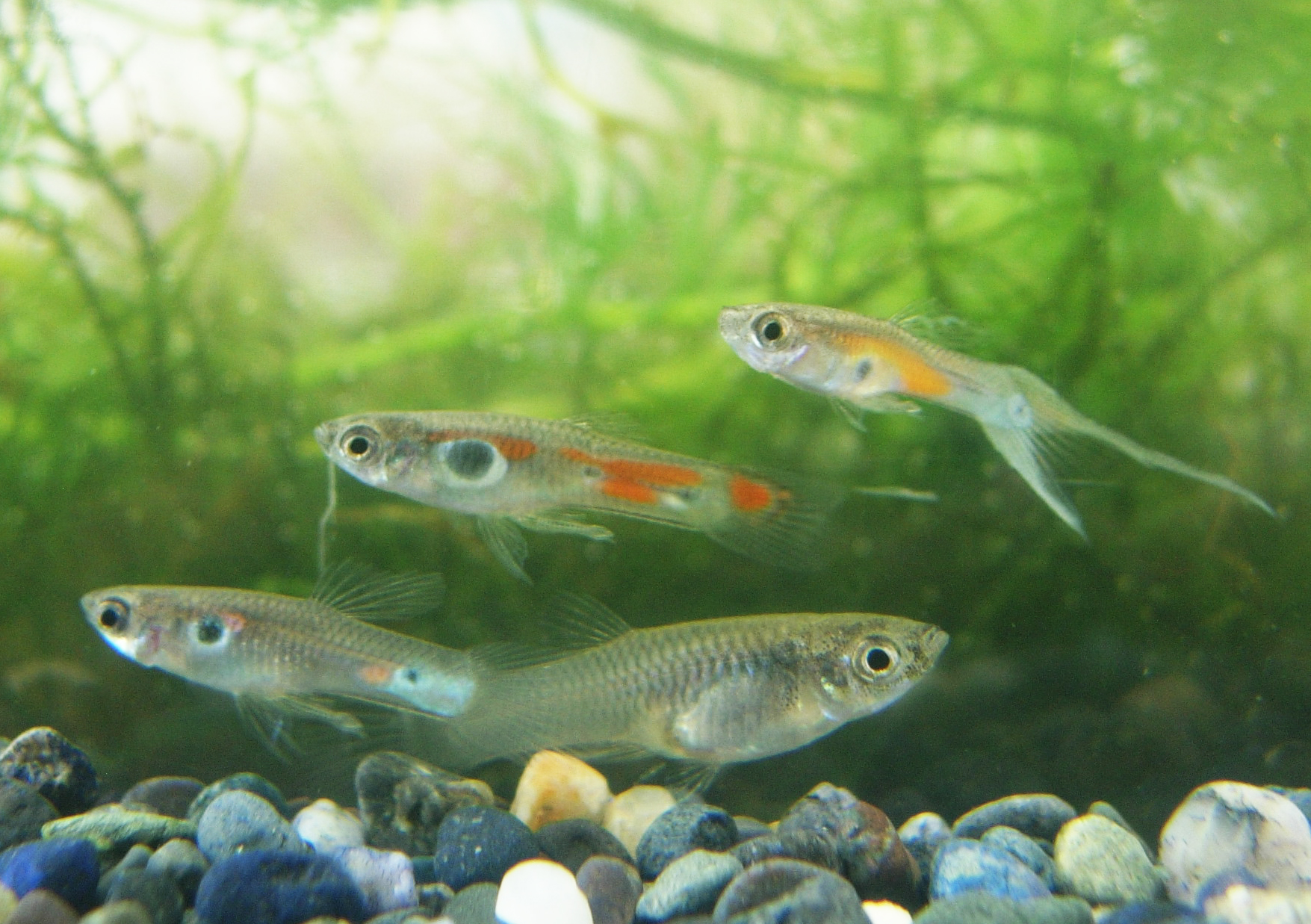 Wild guppies. Three males showing various body colors and one female.
(Photo by A. Sato, Gunma Univ.)
Male guppies have exaggerated and diverse body colors and females exhibit preference for some components of male color patterns. These male colors and female preference vary among and within wild populations. Interestingly, inter-individual variation in color vision has also been reported in the guppy.
Therefore, it has been hypothesized that the variation in color vision causes variation in female preference for male color patterns. However, the genetic mechanism underlying color vision variation and the relationship between color vision and female preference has not been demonstrated. Dr. Yusuke Sakai and Professor Masakado Kawata focused on opsin genes which code light-sensitive pigments in retina.
A guppy has nine opsin genes. One of the opsin genes (LWS-1) codes for a protein that detects visible light in long-wave light spectrum (i.e., orange-red), shows allelic polymorphisms and the variants are maintained in natural selection in wild populations.
They showed that the expression levels of multiple opsin genes varied between individuals with different LWS-1 genotypes. In addition, rearing light environments also affected the expression levels of opsin genes. Using a behavioral experiments, they showed that the variation in LWS-1 expression affected the sensitivity of individuals to different-colored light at the behavioral level. These results indicate that the expression variation in opsins caused by both genetic polymorphisms and light environment during growth generated the variation in light sensitivity.
Then, they investigated whether the variation in the opsin gene expressions affected female preference for male orange colors, which has known to be one of the important mate choice criteria for female guppies. Using digitally modified video images of a male, they showed that females with higher opsin gene expressions exhibited stronger preferences for more luminous orange spots.
A set of results in their study suggest that difference in light sensitivity is mediated by both genetic and plastic changes in opsin gene expression and causes variation in female preference for male sexual colors. These interactions between visual property and mate choice might be the driving force behind the evolution of extreme diversity in male guppy sexual colors.
Press release in Japanese:
http://www.tohoku.ac.jp/japanese/2018/11/press-20181108-opsin.html