Tohoku University researchers have shown that Bergmann glial cells, astrocyte-like cells in the cerebellum, ‘eat’ their neighboring neuronal elements within healthy living brain tissue.
Synapses—structures that allow neurons to pass signals to one another—are regularly pruned throughout a brain’s development to improve its efficiency. Disruption of this is thought to lead to various brain disorders.
The researchers’ findings, which were detailed in the journal Nature Neuroscience, discovered that Bergmann glial engulfing of synapses was enhanced during motor learning in mice’s cerebellum, an important brain region for learning.
Moreover, pharmacological blocking this engulfment inhibited synaptic structural changes, resulting in part of the learning and memory process being lost.
Glial cells, non-neuronal cells occupying about half of the brain, were previously believed to be like glue—merely filling the gap between neurons. However, recent findings show that glia encode information in their own unique way.
“Glia are, of course, not another subcategory of neurons,” says Professor Ko Matsui of Tohoku University’s Super-network Brain Physiology lab, who led the research. “We have yet to uncover the glial impact on information processing.”
When cells engulf neighboring cells to flush out debris and pathogens, it is called phagocytosis. Phagocytosis by microglia, immune cell in the brain, in damaged and diseased brain tissue has long been recognized. Recent reports have established that astrocytes and microglia phagocytose neuronal elements, including synapses during early brain development or when dramatic neuronal network remodeling occurs in the diseased brain.
Tracing engulfed materials is challenging in healthy brains, since the lysosomes in the glia quickly degenerate the proteins.
Matsui and his team turned to the degeneration-resistant fluorescent protein pHRed to alleviate this problem. Using high-resolution 3D electron microscopy, they captured the Bergmann glia nibbling on synapses parts and other neuronal parts in adult healthy mice brains. Furthermore, glial phagocytosis was enhanced in brain tissues taken after cerebellar-dependent motor learning tasks. When phagocytosis was pharmacologically blocked, some of the learning was lost.
“Our finding provides a novel glial mechanism in synaptic plasticity linking learning and memory. It is possible that the phagocytic capacity of glia might be variable under the certain states of our mind and glia may play a pivotal role in meta-plasticity of memory formation,” said Matsui.
Lead study investigator Dr Yosuke Morizawa says that their discoveries could have possible implications for explaining why synaptic shrinkage and loss occur in depression, schizophrenia, and Alzheimer’s disease.
The team’s next step is to see if glial phagocytosis of synapses malfunctions in animal models of these diseases. “A therapeutic strategy designed to target glial phagocytosis might enhance memory and treat certain brain disorders,” added Matsui. 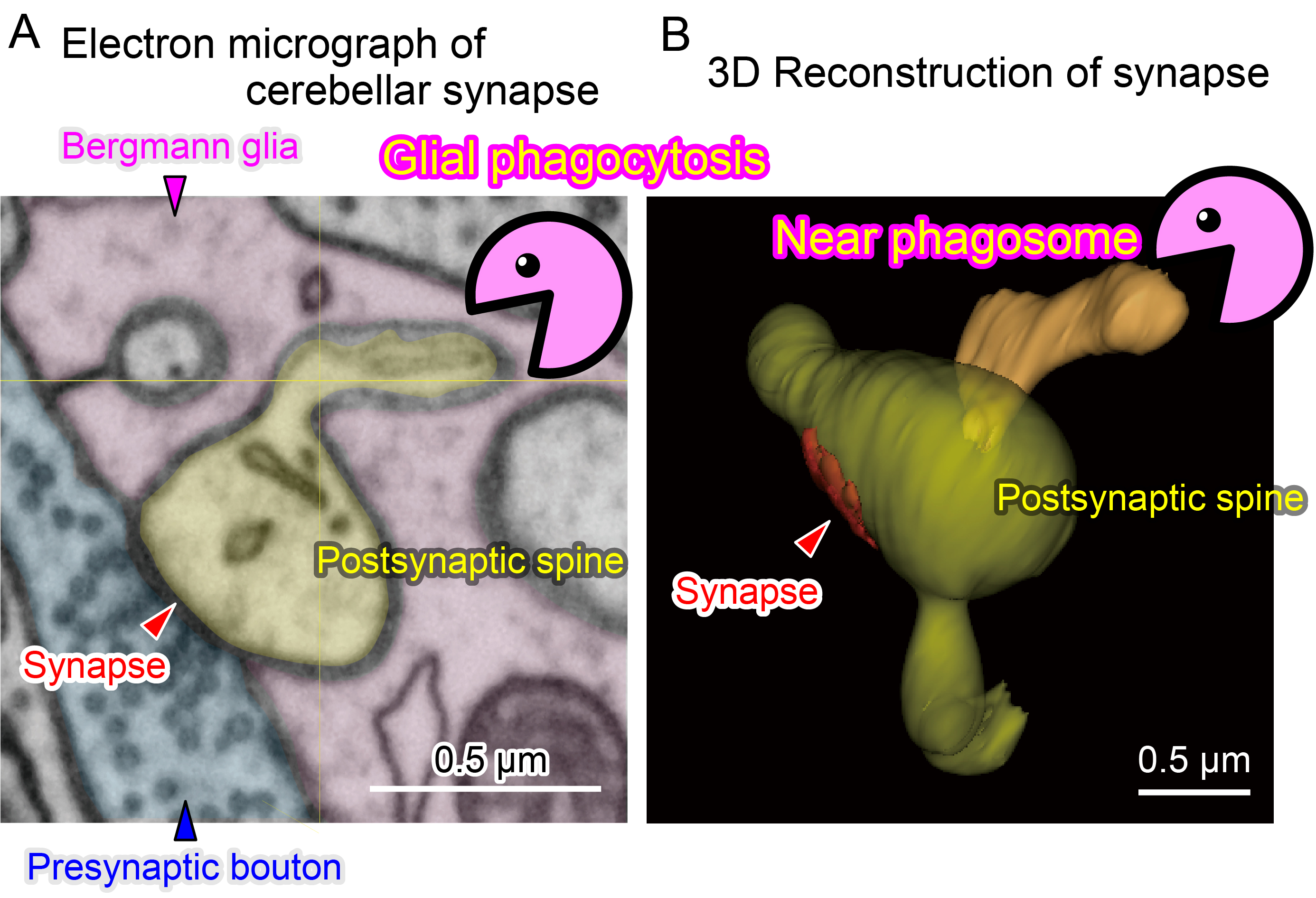