Feeding is essential for survival. Senses such as smell or sight can help guide us to good food sources, but the final decision to eat or reject a potential food is controlled by taste.

While the tongue is the main taste organ in humans and other mammals, insects not only have taste organs inside their mouthparts, but also on the body. Their legs, wings and ovipositor (the organ with which females lay eggs) can contain taste receptor neurons.

The need for so many taste organs in insects is not understood very well. However, a clue for understanding their function comes from examining the anatomy of the taste-sensing neurons. These neurons send projections to different parts of the central nervous system of the fly. This suggests that taste information received from different parts of the body is processed differently in the brain. Therefore, different taste organs may have different functions.

To test this idea, Thoma et al. used the fruit fly Drosophila as a model for insects. With Drosophila, it is possible to target small numbers of neurons and to block them or activate them with genetic tools. The scientists blocked different groups of sweet-sensing neurons and measured sugar choice, the first step in feeding behavior. Normally, hungry flies choose sugar very quickly, but the flies which had all sweet-sensing neurons in their legs blocked could not choose sugar.

The scientists then examined the sweet taste neurons in the legs and found two populations of neurons. One group of neurons connected directly to the brain of the fly. The remaining neurons connected to the ventral nerve cord, a structure analogous to the spinal cord in humans.

These results show how feeding, a complex behavior with many steps, is organized by the specialized contributions of different groups of neurons. The role of the taste neurons in other organs is only partially understood, but it is possible that they are important for the later stages of feeding.

Additionally, popular insect repellents such as DEET rely on chemicals that smell and taste bad to insects. Therefore, a better understanding of insect choice behavior and feeding may also contribute to the development of more effective pest control. 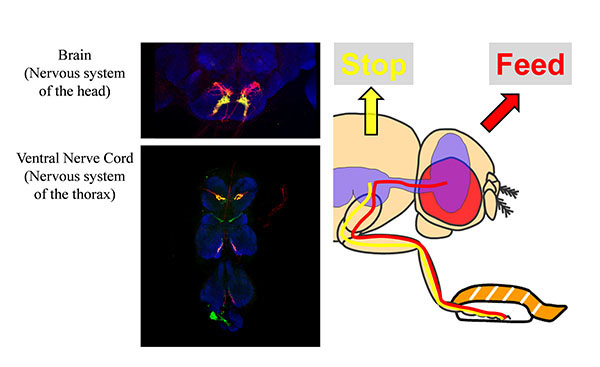 For enquiries about this article: