Jellyfish are animals that possess the unique ability to regenerate body parts. A team of Japanese scientists has now revealed the cellular mechanisms that give jellyfish these remarkable "superpowers."
Their findings were published on August 26, 2019 in PeerJ.
"Currently our knowledge of biology is quite limited because most studies have been performed using so-called model animals like mice, flies, worms and fish etc. Given that millions of species exist on the earth, it is important to study various animals and broaden our knowledge," said Yuichiro Nakajima, Assistant Professor at the Frontier Research Institute for Interdisciplinary Sciences, Tohoku University in Japan, and corresponding author of the study.
"Jellyfish are one of such animals with interesting biological features," Nakajima said. "For example, they have stinging cells, called cnidocytes, to capture prey."
Cnidarian jellyfish - named for their stinging cells - have existed on the earth for more than 500 million years. They form part of a unique group of animals that are not bilaterally symmetrical and also possess the capacity to regenerate body parts -- a trait most of the complex animals, including humans, have lost. These early-diverging primitive animals could play a pivotal role in helping us better understand the evolutionary biology of bilaterally symmetrical animals, like us humans.
For their study, the researchers used Cladonema pacificum -- a jellyfish species from the Cnidaria phylum that has branching tentacles -- to investigate the spatial pattern of cell proliferation and their roles during jellyfish development and regeneration, aiming to establish the cellular basis of these phenomena. "With easy lab maintenance and a high spawning rate, Cladonema is suitable for studying various aspects of jellyfish biology," Nakajima explained. 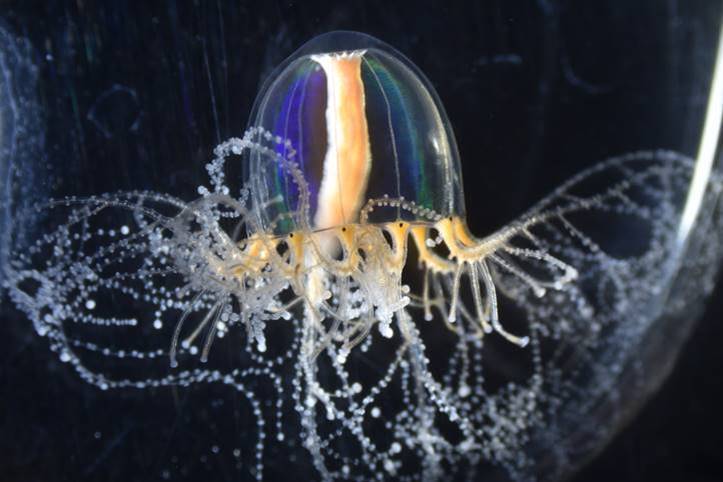 Cladonema jellyfish have branched tentacles ⒸSosuke Fujita, Tohoku University
To investigate the role of cell proliferation following food uptake in determining body-size growth, appendage shape, and regeneration in Cladonema jellyfish, the researchers examined the distribution of cells that play a key role in DNA replication through cell division, producing new 'daughter' cells that are identical to the original 'parent' cell. They found spatially distinct groups of proliferating cells in the medusa (sexual) life-stage, with cell proliferation in the umbrella-shaped portion of their body being uniform, while cell proliferation in the tentacles was clustered.
After withholding food or blocking cell proliferation using a cell-cycle inhibiting agent, the researchers found body size growth was inhibited, and they also observed defects in tentacle branching, differentiation of stem cells into stinging cells, and regeneration. These results suggest that free-swimming adult jellyfish in the sexual stage possess actively proliferating cells that play a key role in controlling body-size, tentacle shape, and regeneration.
Additionally, the researchers found that when food was not available, the jellyfish exhibited a gradual decrease in body size after 24 hours, suggesting they are sensitive to food availability and are able to adapt to metabolic changes in response to environmental conditions. 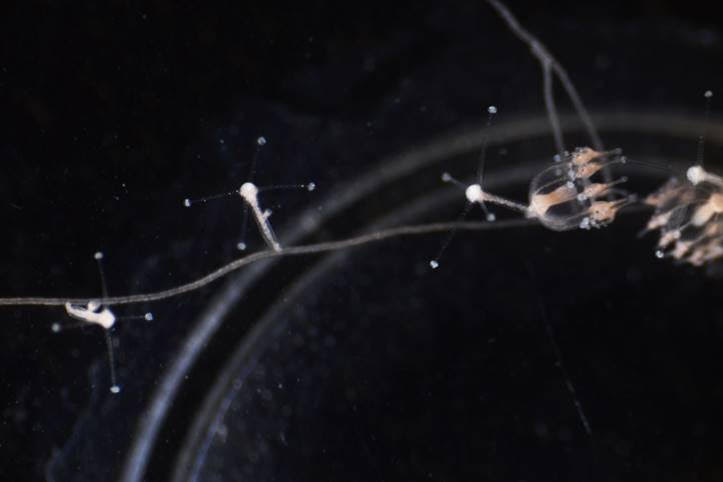 Cladonema polyp give rise to jellyfish ⒸSosuke Fujita, Tohoku University
"We are currently trying to understand the molecular mechanisms of Cladonema development and regeneration," said Sosuke Fujita, a master student in the Graduate School of Life Sciences, Tohoku University, and the first author of the study. "Based on this research, molecular control of cell proliferation is the key to deciphering jellyfish growth and regeneration.
According to Nakajima, the researchers also plan to investigate the differences between the two different adult stages in jellyfish: medusae (sexual) and polyps (asexual). "For these purposes, we will identify gene expression changes associated with different developmental and regeneration contexts and plan to introduce genetic tools for manipulation of genes."
The study by Nakajima's group got a lot of attention from foreign media and was highlighted by several worldwide news.