Around 1% of the world's population lives with epilepsy; yet only 65% of epilepsy patients can manage their symptoms with medication. Currently, surgically removing the lesion in the brain responsible for the condition is the only radical cure for epilepsy. Still, many patients have to take medication for the rest of their life to deal with their seizures.
A research group led by professor Ko Matsui from the Super-network Brain Physiology Lab at Tohoku University reported on a stimulation paradigm used on experimental animals that could potentially cultivate resilience to epilepsy.
Frequent seizure-evoking stimulation to the brain has been shown to induce epileptogenesis and epileptic brain conditions. To the researcher's surprise, however, repeated stimulation resulted in a dramatic decrease in the seizure response to the stimulus.
"Our brain has an infinite ability for plasticity," says Matsui. "If an epileptic state can be created, we must query whether it is also conceivable to reverse the transition or to override the existing hyper-excitable circuit with an additional suppressive system."
Using optogenetics technology to control the activity, Dr. Yoshiteru Shimoda, Matsui and their team demonstrated that a specific stimulation paradigm prompted the release of the endogenous inhibitory transmitter adenosine from glial cells. This converted the rat's brain to a state strongly resistant to seizures. 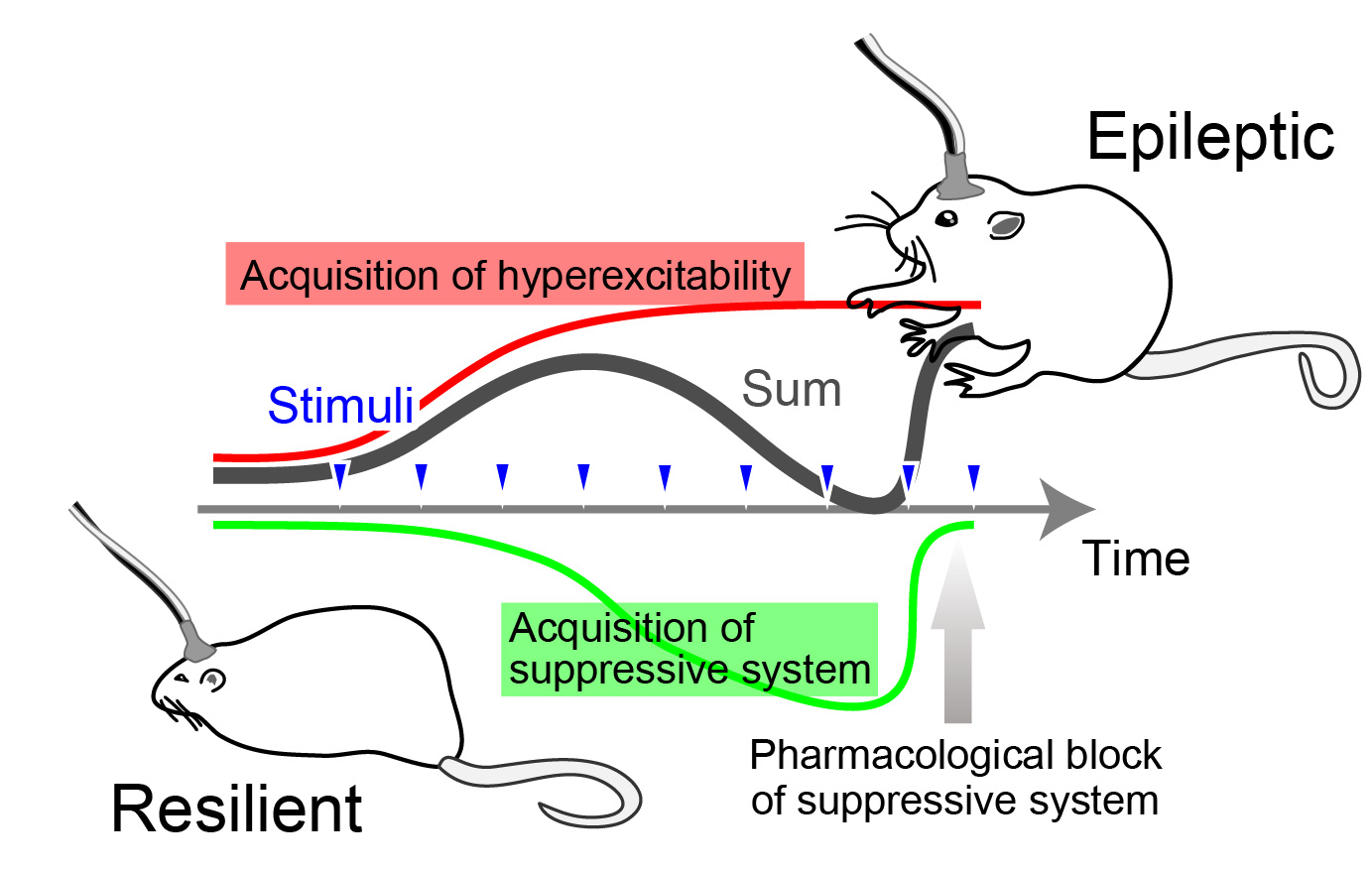 Epilepsy resilience can be created by enhancement of suppressive system. ©Matsui
Details of their findings were published in Neurobiology of Disease online
Matsui is cautiously optimistic. "Although epileptogenesis unfortunately could not be reversed, we showed we could invoke the homeostatic nature of the brain circuit to contain hyper-excitation."
For the current study, light-sensitive proteins were genetically expressed in neurons to regulate moderate neuron-to-glial signaling at will. Such optogenetic technology would be difficult to apply in human patients, noted Matsui.
"Despite clinical use being a long way off, it is possible to imagine a future where a therapeutic strategy can directly target glial cells and enable the creation of an epileptic resistant state."
Publication Details:
Shimoda Y, Beppu K, Ikoma Y, Morizawa YM, Zuguchi S, Hino U, Yano R, Sugiura Y, Moritoh S, Fukazawa Y, Suematsu M, Mushiake H, Nakasato N, Iwasaki M, Tanaka KF, Tominaga T, Matsui K (2022) Optogenetic stimulus-triggered acquisition of seizure resistance. Neurobiology of Disease, 163: 105602.
https://doi.org/10.1016/j.nbd.2021.105602
Contact:
Ko Matsui
Super-network Brain Physiology, Graduate School of Life Sciences, Tohoku University
Email: matsui(at)med.tohoku.ac.jp
Website URL: http://www.ims.med.tohoku.ac.jp/matsui/